To me, Carlow Castle is a strange project that has been around for a long time. It even had a small resource but the general public would never have heard of it. It was as if it was unloved and was one of the projects that would be stranded.

It was all about lithium for a while and then suddenly cobalt reared its head up.  I came across the project only when I became a shareholder of the company many moons ago.

The company started pumping out announcements and I thought hey, I am a shareholder of a cobalt company.  After doing some research on the project, I came to feel that this Carlow Castle project was the thing, it had real potential to be something great.  Then the conglomerate gold rush came and it was all on for the punters… 🙂

I still felt that Carlow was the prize.  At that time, I was a firm believer in the resurgence of base-metals and Ni especially.  I also became a copper fan for some reason.  Anyway, Carlow to me was all about this part of the equation and I was happy that I was in on the action.  Like my normal thing, I just let the market do its thing and I was very comfortable with  the team at Artemis, after all, they have vested interest to make the share price go up too.  That part happened and then everyone was happy…  however, I have yet to see Carlow become the mainstay of the company till now…  well, I hope that’s what it will mean.

On the  29th August 2018,  ARV announced what I think is a significant addition to the deposit.  The interception length and the grades observed in my opinion shows that the company may be showing signs that they have a better handle on the mineralisation.  The image below is a part of the announcement.  It is on the Artemis website.

I am not saying that this is going to be a world class mine.  However, I am now happy that more work is being done and have become more than intrigued by the potential of this project.  The length of interception announced has got to get people excited, if not, they need to get their heads examined.

It is nice to see that amount of drilling and the results are looking to be building a nice picture.  I hope that the management will continue to take the punt and drill this bugger out.  I can see that there appear to be zones happening.  A more gold-rich zone and a more cobalt-rich zone ( or a less gold-rich zone).

This announcement follows another on the 6th August which also shared some great intercepts which I believe shows the consistency that is needed to make this project viable from a technical point of view. The commercial viability part will need more work.

The crew in Artemis have done an excellent job in doing the drilling the correct but painful manner. There have been many projects that have been drilled out in a hurry to please the equity markets.  I guess it is a easy thing to do when you have loads of cash to drill holes.  It is easy to be good when you have the money to test ideas and concepts :-).

One of the things I would have a concern would be it’s the mineral assemblages…  Too much copper/cobalt and you have a headache…  The amount of this and that is not always a good thing in mining 🙂  However, I guess having a good problem to wonder about is better than not having to wonder about a bad problem.

According to a release on the 19th June 2018,  Artemis mentioned the following,

Those numbers are not the best, but it will do for now.  As I mentioned the downside of this project, in my humble opinion is the metallurgical factors. The recovery rate of 67.30  is not fantastic, but I think with the time that they have, I would hope that they will try and work that out.  The good thing about the team at Artemis is that I can see grey hairs mixed amount no hairs… Means that they have been around and have done much thinking… 🙂

One of the things I like about Carlow Castle is that it has an excellent chance to be an open pitable mine, and the future resource upgrade should make it very viable.  There are probably many technical people out there that will argue, but I will preferably be on the side of most likely than most unlikely at this stage.  If they can make the resource bigger and get a really good handle on the structure and metallurgy, this will be a great little project. I agree that there is still a long way to go.  There may still be many issues that may be counter-intuitive to making Carlow attractive, so time and spending those millions in the company’s bank account will be important.

Logistically, this is a great place.  Carlow is a stone’s throw from Karratha and the infrastructure will a non-issue.

As mentioned, the geology is complicated, and this is good because this could mean that there will be more goodies hidden (the ever optimist in me is always looking at the bright side 🙂 ).  As I mentioned earlier, traditional EM (Electro-Magnetic), IP (Induced Polarisation) nor magnetic geophysical surveys have not picked up Carlow.  It appears that only SAM (Sub Audio Magnetic) was effective.  For those interested in understanding more, please feel free to contact the buys at Artemis.  I am sure they will give a better explanation than me.

Structurally, the last announcement made mention that the mineralised body seem to be turning south. This is another encouraging new information and could lead to more upgrades.  The next phase of drilling will be very interesting. However, I would say that we all need to be patient as it will take more than a couple of drill holes to define where the mineralised body is heading.  As easy as it turning south it could also face more change in direction. As I keep mentioning, the complexity of the deposit is a good thing as long as the drilling keeps following any new ideas.

You probably will never see it in the same category as Bou Azzer, but it will likely find its level of significance.  Like many of these cobalt hopefuls out there, there is a big difference in a project that can work or a project that cannot work.  Blackstone Resources (ASX: BSX) went to Canada to drill a high-grade Cobalt project and was riding high with its share price reaching a high of AUD$0.66.

Another drilling program later and they are now at AUD$0.11. Logistically, they were also in a challenging area. If they had a positive result from their drilling,  they would have had to figure out how to manage the processing part.

Most investors out there would not think about this.  I must admit that I sometimes feel like that as well.  Why bother about those silly things like whether a mine is ever going to be built in that place, even though it could be in that godforsaken place… 🙂  In the heat of buying shares, one can easily overlook some silly but essential factors :-).

Carlow on the other case is flat, and the only hill is that from an ant.  I visited the place in October 2017 with great thanks to Artemis Resources.  A smooth drive on bitumen road north and then a turn south on a dirt road and you are on site.  Not precisely remote by anyone’s definition. 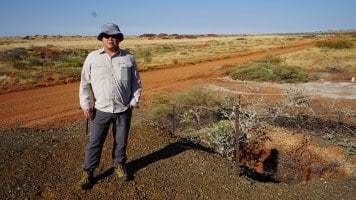 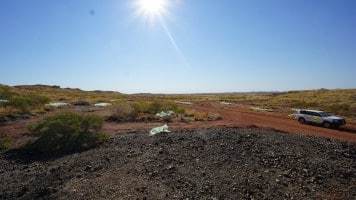 As you can see in the photos above, the area is a fantastic place to work.  All you have to worry about is the extreme heat in summer and the flies between the seasonal change between the cold and hot seasons.

I remember a very prominent person in West Perth saying that he spent continuous days in a North African (could have been Eritrea) minister office waiting for a signature….. But I believe they sold that project after doing work for many millions and they did well.

From a former company director and exploration student, Carlow is an excellent project to grow. I do feel that there is a great chance of Carlow making the grades. Looking at the projects in the small company space (although the market cap of ARV is not tiny), there are very few “base-metal” projects (I don’t like the Battery mineral terminology) out there that gives me the feeling of growth and blue sky.  Most would look at the resource number and say its small. The more detailed investigation will most likely make it even smaller with many questions, but I think there is still a lot of meat that will make Carlow Castle the dark horse in the Cobalt scene.

Remember that as much as the associated minerals can become an issue, if resolved, this can be a massive positive.  If all the credits make a play, this deposit, whether it is a Cobalt, Gold or Copper project, will become very cost effective and make a lot of money for ARV.  I have purposely made little reference to Carlow Castle as a cobalt project because I think this jury is still out having lunch.  When I was last having conversations with associates, who have many opinions, we all agreed that this could have as much chance of being a gold deposit as it is to be a cobalt project and a minor extent a Copper deposit.

In conclusion, I do feel that this is one of the better projects to watch.  Very complicated but there is enough smoke already to show that this is a project worthy of keeping and nurturing.  In my opinion, this will add value to the company and will have more chance of making a mine than not.

Just in case people are wondering, I am not a shareholder of this company at the time of writing…….

The information contained on this website is the writer’s personal opinion and is provided to you for information only and is not intended to or nor will it create/induce the creation of any binding legal relations. Read full Disclaimer.

If you find this article informative and useful, please help me share the information.  I try and write about topics that are interesting and have the potential to be of investment value.  It is not easy to find stories that fit those parameters.

If you or your organisation see the benefit of what Samso is trying to achieve and have a need to share your journey, please contact me on noel.ong@samso.com.au.